Don’t try and make me listen
To all your superstition
That you been selling for so, so long . . .
It’s killing me cause your’e so far gone
Fly like a flame through the Face of the Sun
Rise with the fire till the battle is won
Blind to what the world says can never be done
Fight until the end
In the name of Love
I see a 100 devils
Preaching another level
Selling the high road to low, low, low . . .
They’re lying to our faces
And nothing ever changes
They’re saying yes, I say no, no, no . . . 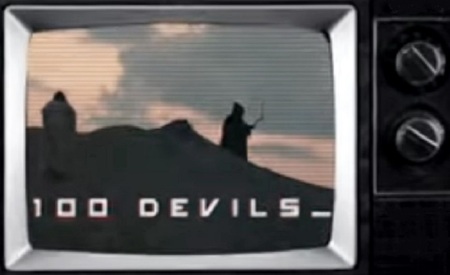 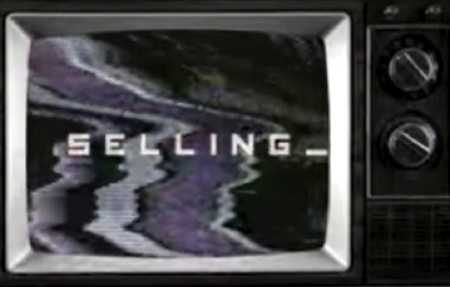 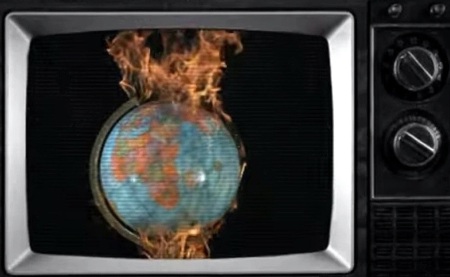 Then said Jesus unto his disciples,

“If any man will come after me, let him deny himself, and take up his cross, and follow me.  For whosoever will save his life shall lose it: and whosoever will lose his life for my sake shall find it.”

“And whosoever doth not bear his cross, and come after me, cannot
be my disciple.”

“Imitate me, as I imitate Christ.” 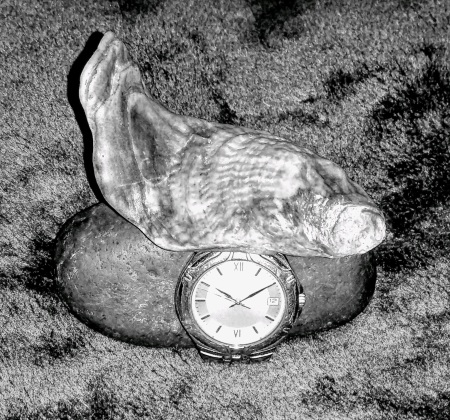 Spoken: The LORD is my shepherd; I shall not want.  He maketh me to lie down in green pastures: he leadeth me beside the still waters.  He restoreth my soul: He leadeth me in the paths of righteousness for His name’s sake.

Sung: through and above:
Our God is an awesome God

Spoken: Yea, though I walk through the valley of the shadow of death,
I will fear no evil: for thou art with me; thy rod and thy staff they comfort me.

Sung: through and above:
Our God is an awesome God
He reigns from Heaven above

Spoken: Thou preparest a table before me in the presence of mine enemies: thou anointest my head with oil; my cup runneth over.

Sung: through and above:
Our God is an awesome God
He reigns from Heaven above
With wisdom, power and love

Spoken: Surely goodness and mercy shall follow me all the days of my life: and I will dwell in the house of the LORD for ever.

Word: with varying emphasis.  Song: fades in with red, soft to strong,
to continuing after, and to through/rising above.  Music: fades in, fills/corresponds.  [Pausing after each spoken verse, while the latter/former moves forward.]  All is repeated, once (where the psalm is further emphasized).

Jesus and Saul (To the Churches) 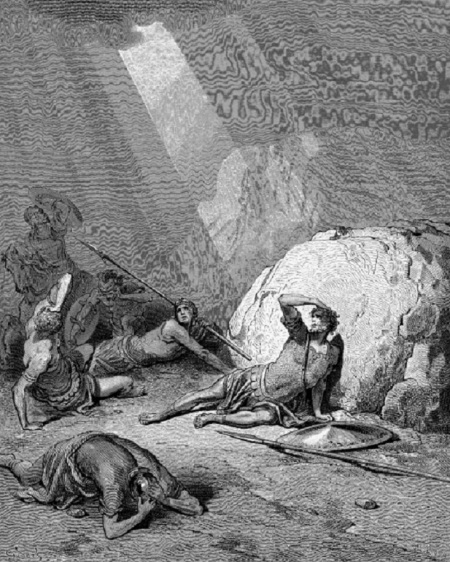 As he neared Damascus on his journey, suddenly a light from heaven flashed around him.  He fell to the ground and heard a voice say to him,

“Saul, Saul, why are you persecuting Me?”
“Who are You, Lord?” Saul asked.
“I am Jesus, whom you are persecuting.”

So he, trembling and astonished, said
“Lord, what do You want me to do?”
“Arise and go into the city, and you will be told what you must do.”

Then Saul arose from the ground, but when he opened his eyes he could see nothing. So they led him by the hand into Damascus.  For three days he was blind, and did not eat or drink anything. 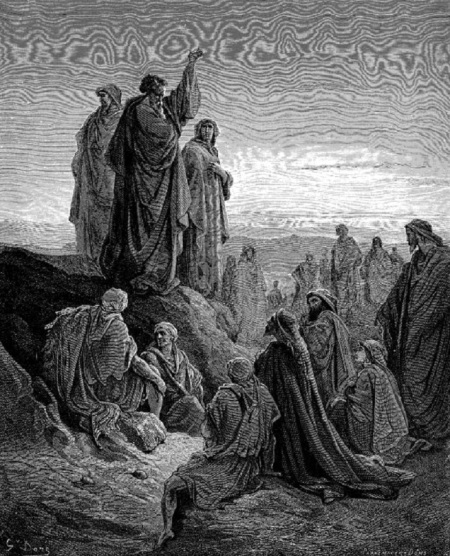 “And it came to pass, that, when I was come again to Jerusalem, even while I prayed in the temple, I was in a trance; And saw him saying unto me,”

“Make haste, and get thee quickly out of Jerusalem: for they will not receive thy testimony concerning me.”

And the night following the Lord stood by him, and said,

“Be of good cheer, Paul: for as thou hast testified of Me in Jerusalem,
so must thou bear witness also at Rome.”

“But I make known to you, brothers and sisters, that the gospel I preached is not according to man.  For I neither received it from man, nor was I taught it; rather, I received it by revelation from Jesus Christ.  For you have heard of my former way of life in Judaism, how I persecuted the church of God beyond measure and tried to destroy it.”
“But when it pleased God, who set me apart from my mother’s womb and called me by His grace, to reveal his Son in me, that I might preach Him among the Gentiles, I did not immediately confer with flesh and blood.”  “(Now concerning the things which I write to you, indeed, before God, I do not lie.)” 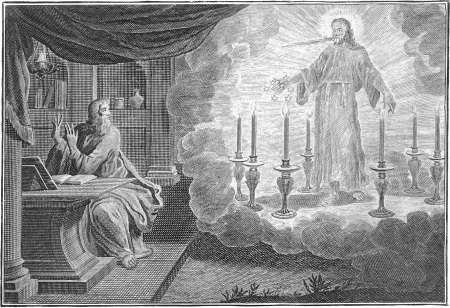 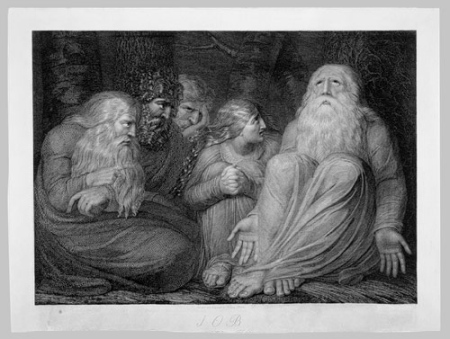 Then the Lord answered Job out of the whirlwind, and said:
“Who is this that darkens counsel by words without knowledge?  Now prepare yourself like a man; I will question you, and you shall answer Me.  Where were you when I laid the foundations of the earth?  Tell Me, if you have understanding.”  “Hath the rain a father?  Or who hath begotten the drops of dew?  From whose womb comes the ice?  And the frost of heaven, who gives it birth?”  “Who has put wisdom in the mind?  Or who has given understanding to the heart?”  “Does the hawk fly by your wisdom, and spread its wings toward the south?”  Moreover the Lord answered Job, and said: “Shall the one who contends with the almighty correct Him?  He who rebukes God, let him answer it.”

Then Job answered the Lord and said:
“Behold, I am vile; what shall I answer You?  I lay my hand over my mouth.  Once I have spoken, but I will not answer; yes, twice, but I will proceed no further.”

Then the Lord answered Job out of the whirlwind, and said:
“Now prepare yourself like a man; I will question you, and you shall answer Me: Would you indeed annul My judgment?  Would you condemn Me that you may be justified?  Have you an arm like God?  Or can you thunder with a voice like His?”  “Who then is able to stand against Me?  Who has proceeded Me, that I should pay him?  Everything under heaven is mine.”

Then Job answered the Lord and said:
“I know that You can do everything, and that no purpose of Yours can be withheld from You.  You asked, ‘Who is this who hides counsel without knowledge?’  Therefore I have uttered what I did not understand, things too wonderful for me, which i did not know.”  “I have heard of You by the hearing of the ear, but now my eyes see You.  Therefore I abhor myself, and repent in dust and ashes.” 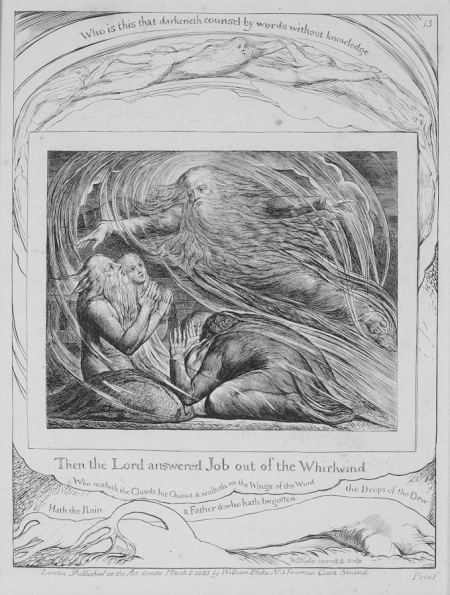