Recently, two prominent articles were published – in opposing veins: “NPR & Trust in Government,” by Robert Shetterly (04/19), which called out NPR for allowing the propaganda operative Philip Zelikow to “frame [a] discussion” on “Trust in government,” while failing to note his long record of purposeful (world stage) obfuscation, including a treacherous role in the area of WTC 7, and “Shame On Jesse Ventura!,” by Jeffrey Scott Shapiro (another operative) (04/21), who asserts “that [Larry] Silverstein planned to use controlled demolition on WTC 7” – as if it’s common knowledge/no big deal.  The focus here is on Shapiro’s brash, out of the blue, aggressiveness (under the cover of being clueless to the overall picture/consequences), while Shetterly’s should be read for many reasons: clarity, as a depiction of rare courage in our dominant landscape, and as a partial portrayal of how Timing works in our fabricated environment.

Perhaps what Ventura is missing is that there is probably more incontrovertible evidence and more witnesses who have already established what happened on Sept. 11, 2001 than most major historical events.  To dispute the conventional historical account is intellectually dishonest and nonsensical.

Regarding WTC 7, the major “news” Shapiro is presently “sharing” (upcoming exclusive!) destroys “the conventional historical account.”  So, was he “intellectually dishonest and nonsensical” in all of his relative writings since 9/11 – until this month?  Yet now, he can be taken as honest, wise, and forthcoming?  Further, all “evidence” to the contrary of the “historical account” was banished from allowable discussion or review from Day One – as were any testimonies of opposing “witnesses.”  (What changed?)

Shapiro: I know this because I was working as a journalist for Gannett News at Ground Zero . . . , and I remember very clearly what I saw and heard.

Here’s a quote from one of those other witnesses, Barry Jennings (who didn’t have a column, and was not permitted to speak freely without a modern Scarlet Letter):

I’m just confused about one thing . . . , why WTC 7 went down in the first place.  I know what I heard.  I heard explosions.  The explanation I got was, it was the fuel-oil tank.
I’m an old boiler guy.  If it was a fuel-oil tank, it would have been one side of the building.

Shapiro: Shortly before the building collapsed, several NYPD officers and Con-Edison workers told me that Larry Silverstein . . . was on the phone with his insurance carrier to see if they would authorize the controlled demolition of the building – since its foundation was already unstable and expected to fall.

Got that?  Remember all the uproar over the Silverstein video (“Pull It”) – scenarios of which he denied in Public, over and over, for years?
New angle! :  “Already unstable and expected to fall.”  Remember this: 1) No plane hit WTC 7.  2) “Fires [alone] have never [In History] caused a steel-framed building to totally collapse [including core columns],” – not  “before or after September 11th, 2001.”  Moreover, review/remember NIST’s “Officially” “Scientific” conclusion:

Shapiro: A controlled demolition would have minimized the damage caused by the building’s imminent collapse and potentially save lives.  Many law enforcement personnel, firefighters and other journalists were aware of this possible option.  There was no secret.  There was no conspiracy (emphasis added).

“Many [on the inside] were aware of this possible option.”  Really?  How “many” people (across the earth) would regard this as the first they ever heard of it?  Are we to believe that this article is the first members of NIST and the 9/11 Commission are hearing of it?  Barry Jennings was inside.  Did he, from the occurrence until his death, consider himself as in on the openness, without any “secret” “conspiracy” ramifications?

Why?  Why would he make such fomenting claims as Casual Facts
(at this time)?  How clearly obvious is this as a representation of Subversive (“discredited”) planting from a “[defaming]” Provocateur?  One answer, as referenced in a recent post:

In Narrated Setups: First, Star Chamber interests decide what directions and actions are needed to fulfill what has been chosen for implementation.  Next (after successful steps), many months (or even years) beforehand, they dispense Talking Points to concerted operatives, pliable/collusive publications, and fronted or “reliable” “news” sources.  Then, the people are (sold) “informed” incrementally as to what is inevitably upcoming.  Thus, under the guise of Facts simply being reported, it works (exceedingly) as a well-timed machine.

The Keys: What this would mean (supposedly unbeknownst to Shapiro): 1) NY and U.S. government officials did not inform the public (for at least 8½ years).  (Why?  What benefits ensue? : Control of Narratives, which equals controlled reactions – as well as the sphere of questions.)  2) They (covertly and overtly) ridiculed, tarnished, and literally destroyed entire livelihoods of people who challenged the official storyline through (in the least) vile accusations of lunatic “conspiracy theories” – without, for at least 8½ years, ever acknowledging even the possibility of demolition.  (Modus Operandi: fully utilizing textbook “paranoid, delusional pack of lies” angles, labels.)  3) It may explain why all WTC 7 references were left out of the 9/11 Commission report.  But, it would also clarify the worldwide subterfuge of NIST’s 2008 (guided) assertions – as well as all the other attributing (staged) “reports” and “scientific” conclusions put forward.  4) For even the possibility of demolition standby to be true, WTC 7 had to have been rigged – AHEAD.  Consequently, a controlling (Deep State) Establishment, colluding with MSM, Banned 9/11 Truthers (to whatever degrees deemed necessary).  Cass Sunstein:

2008: Propos[ed] that the US government employ teams of covert agents and pseudo-”independent” advocates to “cognitively infiltrate” online groups and websites, as well as other activist groups.  [Also proposed]: sending covert agents into “chat rooms, online social networks, or even real-space groups” which spread what [they view] as . . . damaging “conspiracy theories.”

Unsurprisingly, they may come up with statements like “Well, NIST did what they were directed to do.  But, now that this has come out (where, undeniably, we could not have set WTC 7 up – while it was burning), our currently released position is one where we have been secretly rigging buildings all over the U.S. – ahead of time – just in case it’s needed – for many years.”

Controlled demolitions.  Controlled presentations.  And yes, Shapiro “should be ashamed of himself and embarrassed” (to the point of begging God for forgiveness), but he does not work within or for the same world we perceive; he works within and for the secreted/hoaxing Elite (who mold our perceptions):

Karl Rove: “We’re an empire now, and when we act, we create our own reality.  And while you’re studying that reality – judiciously, as you will – we’ll act again, creating other new realities, which you can study too, and that’s how things will sort out.  We’re history’s actors . . . and you, all of you, will be left to just study what we do.”

Again:  What benefits ensue? : Control of Narratives, which equals controlled reactions – as well as the sphere of questions.  That way, everything becomes “Fair and Balanced.”

Update (11/16/2010): Geraldo Rivera: “It is an Intriguing topic.  I certainly am much more open about it than I was, and it is because of the involvement of the 9/11 families and all these engineers and architects.  Clearly they know more than I do.”

Notice how he gives no credit to 9/11 Truthers, in general, regardless of how long they have fought — and withstood national trashings.  Nevertheless, it is interesting to see these new angles (of enlightenment) from a “Balanced” (cough) FOX. 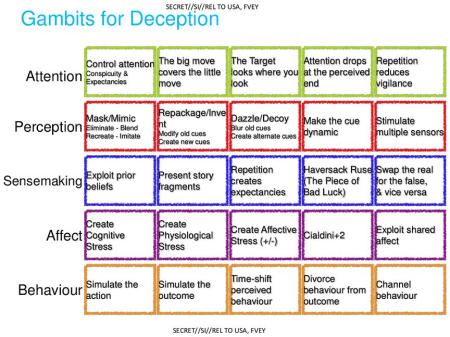 This entry was posted on Saturday, April 24th, 2010 at 3:21 PM and is filed under Censorship, Truth. You can follow any responses to this entry through the RSS 2.0 feed. You can leave a response, or trackback from your own site.